The debate on whether to include text on agroecological approaches and/or principles in Target 10 of the post-2020 Global Biodiversity Framework (GBF) is underway, while reference to this remains bracketed. This is because some Parties are blocking progress, by proposing opposing texts that entrench industrial agriculture such as ‘sustainable intensification’ and ‘agricultural biotechnology.’ The battle lines have clearly been drawn as we enter the COP.

There has been some positive progress in reference being made to the United Nations Declaration on the Rights of Peasants and Other People Working in Rural Areas (UNDROP), which sets out a bundle of resource rights and recognises the historical and continuous role played by the world’s smallholder farmers, pastoralists, and fishing communities in the conservation and sustainable use of agricultural biodiversity, the basis of our food, and even more essential in these changing ecological and climatic conditions. However, this also remains in brackets and has been relegated to an already  controversial Bbis section, which appears to be a legally feeble repository for human rights safeguards. This is a far cry from the much needed recognition of the rights of smallholder food producers, their knowledge and seed systems, and their right to continue their traditional practices related to their seed and food systems in Target 10 itself, at the very least.

Further to this, a lack of specific reference to agricultural biodiversity within the GBF will signify a huge failure of the CBD. The rights of smallholder farmers to seed and the maintenance and development of agricultural biodiversity are cornerstones of agroecology and a just transition away from carbon-based, corporate-controlled, and extractive industrial agriculture and food systems.

Agroecology is living in harmony with nature

Agroecology is intrinsically place-based, grounded in the ways of thinking and being of small-scale food producers, and reflects localized knowledges, culture, climate and ecosystems. Through producing food in harmony with nature, peasants work with their communities to ensure biodiverse social and ecological reproduction on lands and territories. They often collectivize their efforts while maintaining autonomy to control value-chain infrastructure and maintain access to local markets, as well as to have a stronger voice in their interactions with the state. Meanwhile, the industrial agrifood system is pushing a new assault on agriculture with the digitalisation of its processes, promoting financialised carbon sequestration for ‘nature-based solutions’ - putting a price on nature that allows polluters to pay their way out of emissions reduction.

The industrial system is also continuing its drive to control and regulate supply chains to benefit its interests, and even seeking to supplant the attempts of peasants in many parts of the world by sponsoring an ‘agroecology’ that is now promoted by the same corporations and investment funds that for centuries have stripped peasants of the possibilities of an independent agriculture. Agroecology is not simply a shift in transactions in agriculture (swapping chemical inputs for organic, fossil fuels for renewables, etc), it is a relational
approach to food and fiber production that accounts for all aspects of ecosystems, society, culture, cosmologies, and economies, and is our best hope to halt and reverse biodiversity loss, climate change, and pollution and waste.

100 scientists and experts have signed an appeal calling for the strict application of the UN precautionary principle on new genetic biotechnologies. Presented at COP15 by the NGO POLLINIS, the appeal mentions the risks that such biotechnologies, including synthetic biology, genetic modification and genetic engineering, such as gene-silencing molecules (e.g. RNAi-based pesticides) and gene drive organisms (GDOs), could have on pollinators, which are already declining.

The decline of pollinating insects, estimated to include 350 000 different species, is alarming. Due to several reasons, including conventional agriculture intensification, climate change, pesticides, pollution, pathogens, separately or in combination, their decline is endangering entire food webs and ecosystems might lose the fragile balance of which we know very little. To end their fall, pollinators need to be provided with safe habitats. In this context, genetic biotechnologies such as gene drive organisms or gene-silencing molecules could be an additional threat. Too little research has been conducted to truly understand the risks for insect pollinators or biodiversity of a potential release in their natural habitat of organisms, products or components of these biotechnologies. Signatories of this Appeal are therefore calling for a strict application of the UN Precautionary Principle, and urge Parties “to refrain from any releases until there is proof that there will be no negative impacts of direct or indirect effects of the application of these new genetic biotechnologies”

Timeline and Steps for an Enhanced Implementation Cycle: What should the implementation of the post-2020 global biodiversity framework look like?

While negotiators’ eyes are set on the Goals and Targets of the post-2020 Global Biodiversity Framework (GBF), it should not be forgotten that these are not (and should not be) the only essential parts of the Framework.

Given the short implementation period, Parties need to start “domesticating” the GBF as early as possible, by updating or revising their NBSAPs, so that they are aligned with the GBF. As part of this process, Parties will need to communicate national targets which correspond to all elements of the GBF ́s Goals and Targets, as well as National Biodiversity Finance Plans, listing already secured and prospective resources to be allocated for the implementation of the actions contained in Parties ́ updated NBSAPs. It goes without saying that the implementation of existing NBSAPs will continue unhindered during that period, in parallel to monitoring of progress, which will culminate in the drafting and submission of standardized national reports.

This initial bundle of steps at national level is crucial, as a series of global level processes will depend on them: on the one hand, the collective assessment of ambition, based on national targets communicated by Parties, and the global review of progress (“global stocktake”), as an aggregation of progress made. In turn (and as successive steps of this “implementation continuum”), the outcomes of both of these processes will, respectively, lead to the stepping up of both ambition (enhancement of national targets) and action (enhanced implementation, updating of NBSAPs and even CoP decisions adopting improvements to the Enhanced Implementation Cycle). 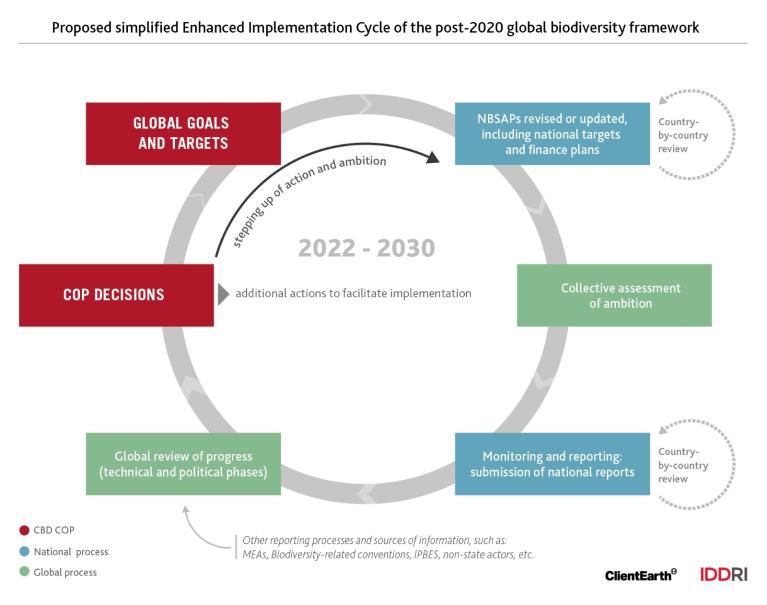