The transition towards more socially just, equitable and ecologically sustainable agricultural systems to address the converging climate and biodiversity crises, in large part driven by industrial agriculture cannot be overemphasized. Yet, negotiations regarding Target 10 of the GBF are at an impasse  because proposals on transitioning towards agroecological systems are being undermined by ecologically catastrophic proposals– including ‘sustainable intensification (SI)’.

For Africa, where smallholder farmers predominate, a nod by the global community in the GBF for SI, will give the green light for entrenching the agriculture system that will be the death knell for these farmers. SI entrenches an industrial agriculture paradigm that is wholly captured and controlled by big agribusiness. It indisputably entails ecologically destructive monocrop production systems, whose economies of scale favor large scale production, based on the use of risky and costly patented genetically engineered seed and associated toxic synthetic agrochemicals and fertilizers.

By contrast, agroecology is an integrated and appropriate response to the multiple challenges facing smallholder production in the era of climate change and global disruptions. Further, it hugely contributes towards democracy, social justice, and an inclusive economy. Agroecology is an effective response to meeting multiple Party objectives, ranging from food and nutrition security, natural resource management, biodiversity conservation and sustainable use, sustainable water access and use, localisation, cooperative and small enterprise development, spatial planning, local economic development, employment, empowerment of women and youth. Agroecology and SI cannot and should not co-exist within the GBF if Parties are really serious about the urgency of the tasks at hand and the lateness of the hour to do the right thing.

When thinking about corporate power within the CBD, it is worth looking at the history of the corporate structure. The (British) East India Company received its Royal Charter in 1600, giving its members the right to share in the monopoly on trade in “the Indies”. During the century its members amalgamated their stock and became a partnership. Then the partnership sold its stock to the company in return for a share in the company, which then traded stock in its own name with members receiving a share of the profits. It thus became the first commercial corporation owned by shareholding members – with no discussion or  oversight from government... In 1855 an Act was passed in England limiting shareholder liability to the amount they had paid for their shares. Then in 1966, UK, two decisions (the so-called “Bell Houses clause” and the Court of Appeal’s decision) transferred the right to decide the limits of a Corporation’s powers from the Courts to the Board of Directors of each Corporation... This allows Directors of Corporations knowingly to cause harm to the public in the pursuit of profit, because the Corporate form protects them from legal responsibility for their actions. Thus shareholders, with full knowledge of that harm, can invest without any fear of being found legally responsible.

Corporate human rights: In the Universal Declaration of Human Rights the word ‘everyone’ does not only apply to people (natural persons). It may also include companies and corporations, because they too are defined as legal persons once they have been ‘incorporated’. They may use their status as legal persons to claim aspects of human rights: for example, freedom of speech in order to lobby and advertise.
Please see https://www.econexus.info/publication/who-is-in-charge

20% of the world’s population - the Global North - uses 80% of the world’s resources. And it is the highly industrialised countries of the Global North who are calling most loudly for a ‘nature-positive world’. The CBD text does not define ‘nature’. In contrast, ‘biological diversity’ (or biodiversity) is clearly defined, and includes ecosystems and habitats, species and communities, and genes and genetic material. ‘Positive’ is even more ambiguous than ‘nature’ and is related to other concepts such as ‘net gain’ and ‘no net loss’. If the CBD approves ‘The Measurable Nature Positive Goal for the CBD Mission’, it will water down what little ambition exists in the GBF, and developing countries are likely to face the greater burden of becoming ‘nature positive’. Once again finding a way to capitalise on false solutions to problems they have caused, The Future of Nature and Business report (2020) estimates that a nature-positive economy can unlock $10 trillion of business opportunities by transforming the three economic systems responsible for almost 80% of nature loss: energy, infrastructure, and food.

In fact, the most effective way to transform economic activities in order to halt and reverse biodiversity loss is through strong regulatory measures on the actors behind the destruction of ecosystems, which can be strengthened through ambitious targets in the GBF. A framing that would benefit the business sector more than key rights holders will not take us on a path to transformative change. To genuinely protect biodiversity, we need to ensure that ecosystem functions and the well-being of the communities who depend on them are no longer threatened and destroyed. Rightsholders, their traditional knowledge and their land and tenure rights are not defined in the nature-positive framing, but they are in the Nagoya Protocol, UNDRIP, and UNDROP. They must be supported by respecting these rights and through direct funding mechanisms. Indigenous Peoples, peasants, and local communities - especially women - are the best guardians of the world’s ecosystems, and yet their vision and wisdom are not leading nor recognised in the nature positive framing. 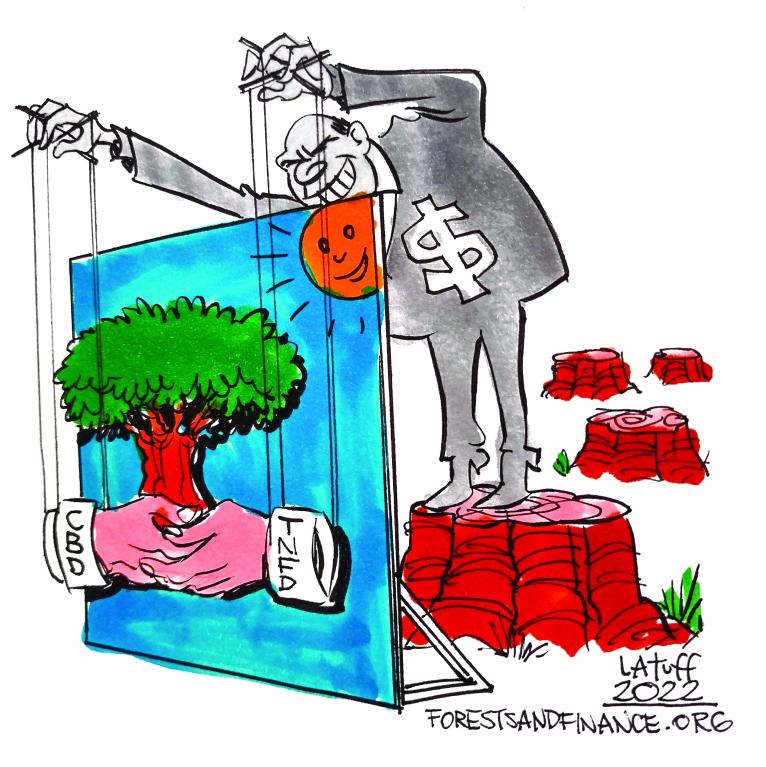