In the Asia Pacific region, environmental defenders, including peasants, fishers and indigenous women and men are nearly three times more likely to be assaulted than defenders in other sectors. Natural resource sectors that are driving killings of environmental defenders or where threats are present, are agriculture, logging, mining, water and dams.

Conflicts over land rights have led to numerous cases of violence in the region, from intimidation and attacks against indigenous peoples for putting up blockades against logging inside their customary territory in Malaysia to the massacre of anti-plantation indigenous leader Datu Victor and his community members in the Philippines to the arrests of 63 villagers including 13 children in Central Java, Indonesia because of a proposed mining project on a productive agricultural land.

During the negotiation for the post 2020 Global Biodiversity Framework (GBF), we have seen the evolution of the text especially on human rights. We have seen text on human rights and rights of indigenous people and local communities (IPLCs) referred to in various targets, relegated to preambular text without guarantees for the implementation of the Bbis section where no one knows what would come of it, to having a seemingly watered down text and half hearted or token references to rights.

We know that the cause of the biodiversity crisis is a system that places profit and power over people and nature. We reject mainstream approaches to “conservation” as it is neo-colonial, unjust and has clearly failed. If we have not said it enough since the beginning of this GBF process, we shall say it again, rights-based approaches must be at the core of this framework. That is non-negotiable.

Governments should not turn the post-2020 GBF into a Great Big Fraud!

We, representatives of small-scale farmers belonging to Indigenous Peoples and local communities (IPLCs), global indigenous networks, national and international civil society and research organizations, and Community Foundations from Asia, Africa and South America, on the occasion of the 15th Conference of the Parties of the Convention on Biological Diversity (CBD), have developed a Montreal Declaration on Small-Scale Women Farmers for Biodiversity Conservation and Sustainable Use. It builds on two decades of collaborations amongst different partners, including Indigenous Peoples from Asia, Africa and South America, and research and social organizations from both the South and North; including jointly organized COP15 side events in Kunming and in Montreal, to share our long-term collaboration results, achievements and community-based solutions in farmer seed systems enhancement, livelihood resilience, climate change and healthy food systems.

The declaration raises 5 key action points, strongly calling Parties to the CBD at COP 15 to:

We believe that the above action points are critical for the success of the Post-2020 GBF
targets, the 2030 Sustainable Development Goals and the Paris Agreement on climate
change.

Read the complete Declaration and signatories at: https://www.iied.org/21301g

The Elephant in the Negotiations Rooms at COP15: Global Tourism and its Impacts on Biodiversity and Indigenous Peoples

While the World Travel and Tourism Council lobbies at the COP 15 Global Biodiversity Summit with its “Nature Positive Travel and Tourism” report in collaboration with the UN World Tourism Organisation, the multi-billion dollar industry’s impacts on biodiversity and Indigenous Peoples and local communities (IPLCs), especially women, is perhaps the most ignored issue in the corridors of the Palais de Congress.

Protected areas are largely funded by revenue generated from both mass tourism and elite tourism, with the majority of profits benefiting governments, tour operators, hotels and airlines. Local communities receive only a pittance. With the GBF’s proposed target of 30% expansion of protected areas by 2030, the cost of the conservation and administration of protected areas will no doubt come from a manifold increase in tourism, with severe implications for the rights of Indigenous Peoples and local communities, their traditional habitats, spiritual and cultural ties, and access to forest resources and livelihoods. Women are the most affected, as access to land and forest resources are increasingly restricted. Millions will be evicted across the world to make way for these protected areas and the conversion of community land into tourism destinations. The increase in tourism and corresponding growth in infrastructure will have harmful effects on biodiversity. Add to that the 8% of global carbon emissions that tourism contributes to climate change, and it’s plain to see why changing our approach to global tourism is essential if we are to protect the planet’s biodiversity.

Estimates of the costs of financing the proposed expansion of protected areas range from 100 to 228 billion USD. The tourism industry, rather than limiting its emissions, is also part of dubious offsetting projects in the Global South. Rather than leading to increased protection of the planet’s biodiversity, the spinoff in tourism revenue generation will create a huge perverse incentive to allow the expansion of a sector that is exceptionally harmful to the planet. Mere expansion of protected areas without a rights-based and gender responsive approach with free, prior, and informed consent of IPLCs, as enshrined in the UN Declaration on the Rights of Indigenous Peoples, will not lead to biodiversity conservation but rather result in biodiversity loss. As an Indigenous delegate to COP15 commented: “We should not create a zoo, [but] rather, connect people with the nature they are disconnected from.” 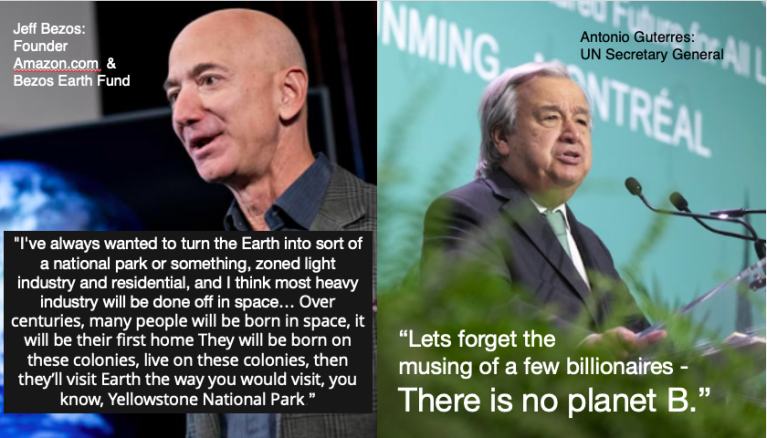